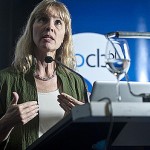 Dr. Karen Emmorey, SLHS, has been selected to present the 23rd Albert W. Johnson Research Lecture for her outstanding contributions as a scientist, mentor and campus leader.   Her lecture, “The signing brain: What sign languages reveal about human language and the brain,” will be on Friday, March 15, from 3 p.m. to 5 p.m. in AL 201.

To: SDSU Faculty and Staff

From: Stephen Welter, Vice President of Research and Dean of Graduate Affairs

On behalf of the University Research Council and the Office of Graduate and Research Affairs, I am delighted to announce that Dr. Karen Emmorey has been selected to present the 23rd Albert W. Johnson Research Lecture for her outstanding contributions as a scientist, mentor and campus leader.

Dr. Emmorey, Professor of Speech, Language and Hearing Science and Director of San Diego State University’s Laboratory for Language and Cognitive Neuroscience will deliver her presentation titled “The signing brain: What sign languages reveal about human language and the brain”, on Friday, March 15, from 3 p.m. to 5 p.m. in AL 201. The lecture is open to the university community and to the public, free of charge. Seating is limited, however, and will be available on a first-come, first-served basis.

Dr. Emmorey started her career at SDSU as a Professor in 2005, after serving as a senior researcher at the Salk Institute. Dr. Emmorey has been described as “one of the top linguistic researchers in the world” by her colleagues. Using a multi-disciplinary approach, Dr. Emmorey has used American Sign Language as a means to better understand language acquisition and to reveal the fundamental cognitive and neural bases of language. By contrasting the processes of sign and vocal languages, Dr. Emmorey has provided seminal insights into how and where languages are stored or processed in our brains, and how information is conveyed or reinforced by visual and auditory feedback loops. And, through neural imaging, she has explored the changes in neural structure and function associated with vocal and visual based languages.

These insights have contributed to the development of clinical practices to address communication disorders due to brain injury or disease and to improve educational practices for deaf and hard-of-hearing individuals. When I asked her to identify the accomplishment of which she was most proud, she did not single out one specific finding, discovery or application that would point back just to her. Instead, she spoke about the breadth of approaches in her laboratory and the people that she had assembled there to take on the many intellectual challenges of language studies.

Her scholarship, spanning the five research areas of bimodal bilingualism, cognitive neuroscience, language cognition, phonetics, and psycholinguistics, has produced over 100 academic articles and four books. Her work has been funded continuously since her arrival on campus by the National Science Foundation and the National Institutes of Health, with her current funding for this fiscal year at $2.5 million. Since her arrival in 2005, she has directed, as principal investigator, over $10 million dollars of federal grant funding.

Dr. Emmorey is a highly sought after speaker with 14 invited and keynote scientific lectures at national and international meetings over the past two years alone. Since 2001, she has been a member of the editorial board for several journals, currently serving on three. She has beenrecognized nationally, as a fellow of the American Association for the Advancement of Science, as well as on our own campus, winning a Monty award for outstanding faculty contributions and as an exceptional mentor for doctoral students.

Perhaps the best way to summarize Dr. Emmorey’s work is to quote from one of her letters of nomination which stated that she is “the sort of investigator who exemplifies the ‘silo-breaking’ research we are striving for” at SDSU.

I would like to invite you, your students, and the community to participate in this year’s lecture program presented by one of our most outstanding faculty members.